Tuvkhun is one of Mongolia’s oldest Buddhist monasteries. It is located on the border of the Övörkhangai and the Arkhangai Provinces in central Mongolia; Approximately 47 kilometers southwest of Kharkhorin.

It was first established in 1648 by 14-year-old Zanabazar, the first Jebtsundamba Khutuktu and spiritual head of Tibetan Buddhism for the Khalkha in Outer Mongolia. He determined that the location, on the Shireet Ulaan Uul mountain overlooking a hill at 2,600 meters above sea-level, was an auspicious place for the construction of the monastery. The first physical structures were built upon his return from studying in Tibet in 1653. Zanabazar, a gifted sculptor, painter, and musician used the monastery, originally called Bayasgalant Aglag Oron (Happy Secluded Place), as his personal retreat over the course of 30 years. While there he created many of his most famous works. It was also where he developed the soyombo script. After his death, it became Tuvkhun Monastery. The small temple was heavily damaged by communists during the upheavals of the late 1930s. During the summer of 1997 extensive ceremonies were performed and a new statue of the deity Gombo Makhagal (Mahakala) was placed on top of the monastery; Refurbishing and consecrating the place. Several monks lead by Lama Shagdarsuren Baynjargal now live at the monastery full time. 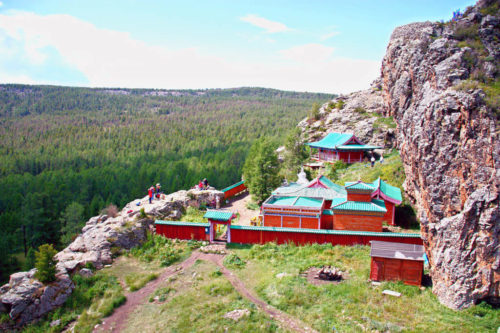 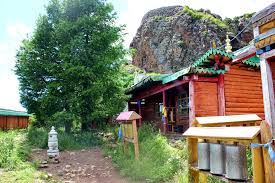 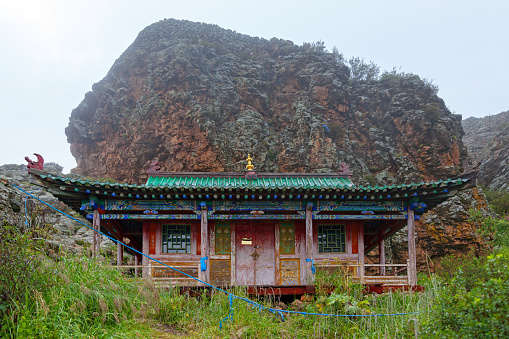 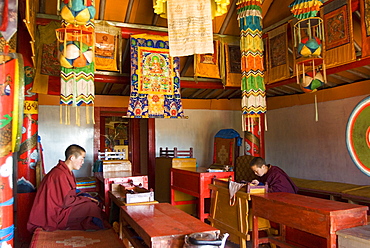 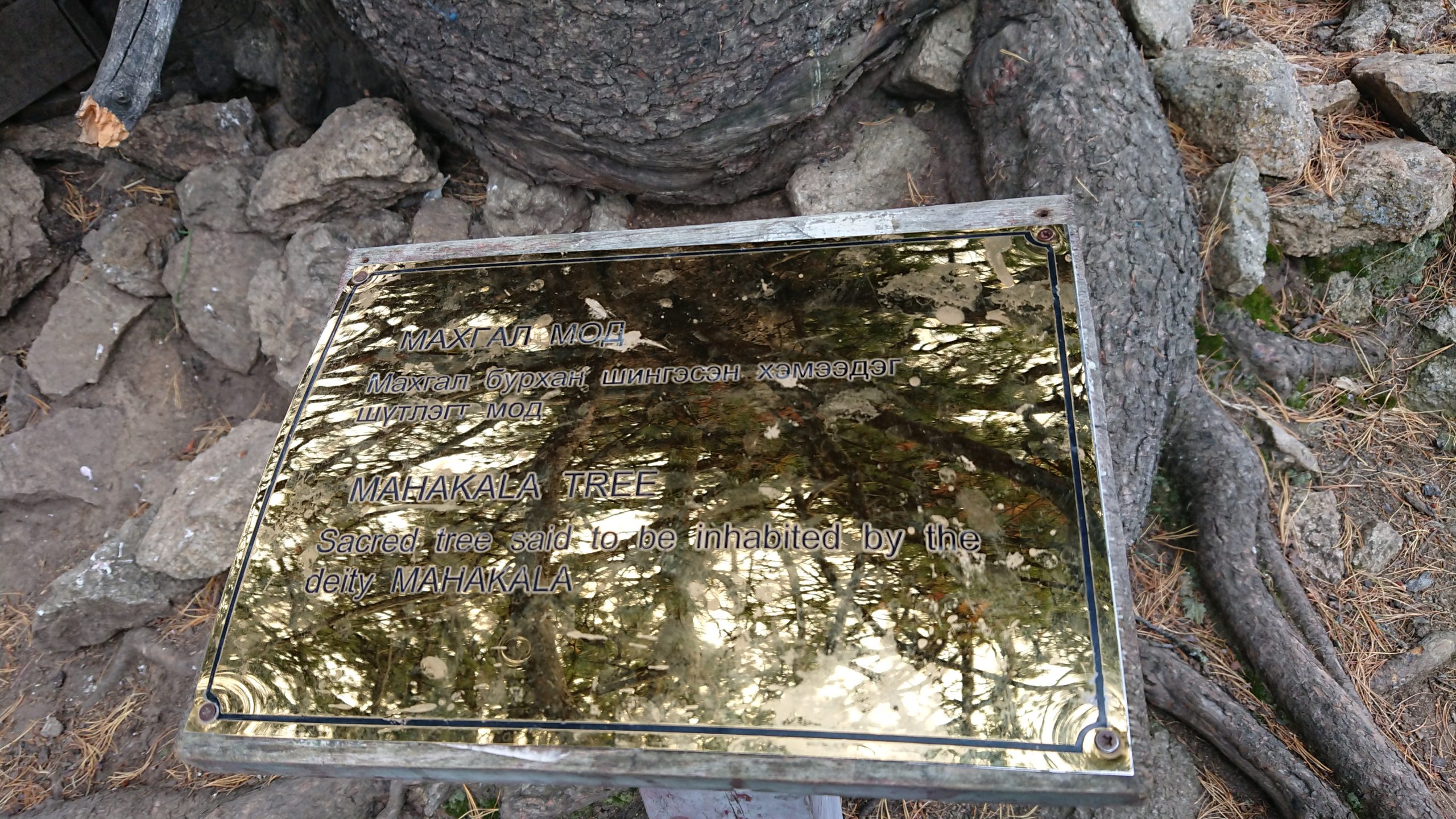 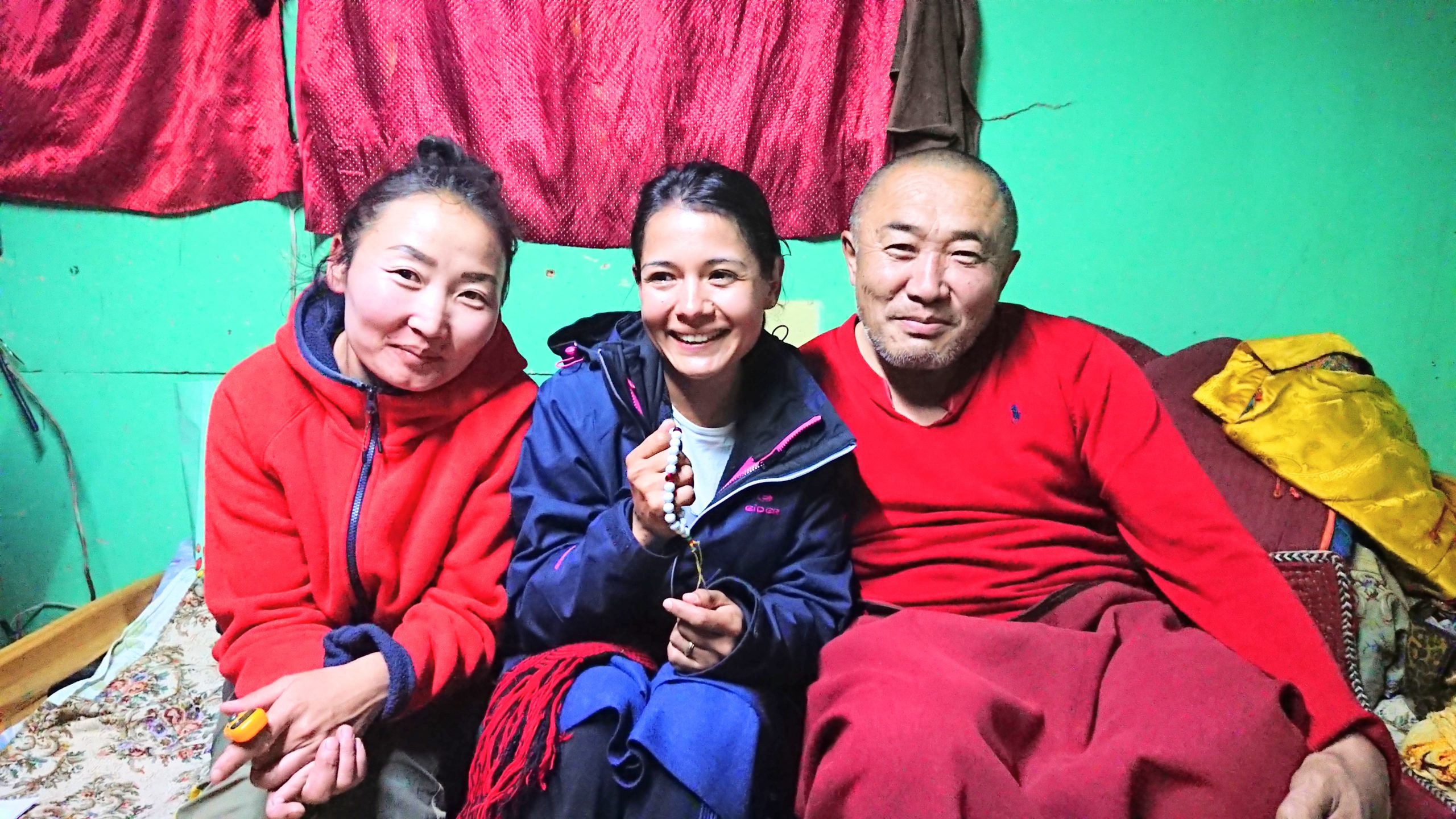 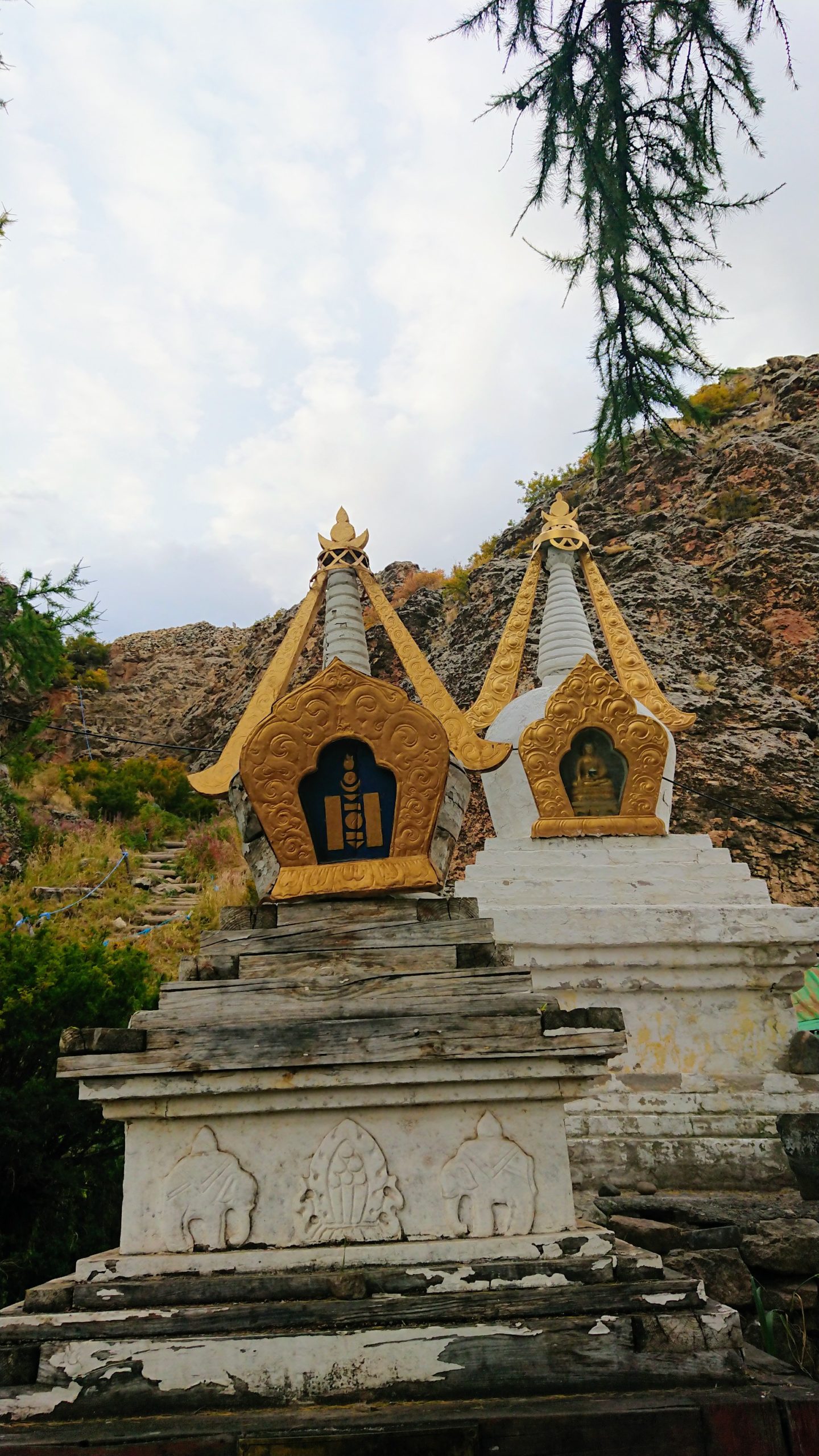 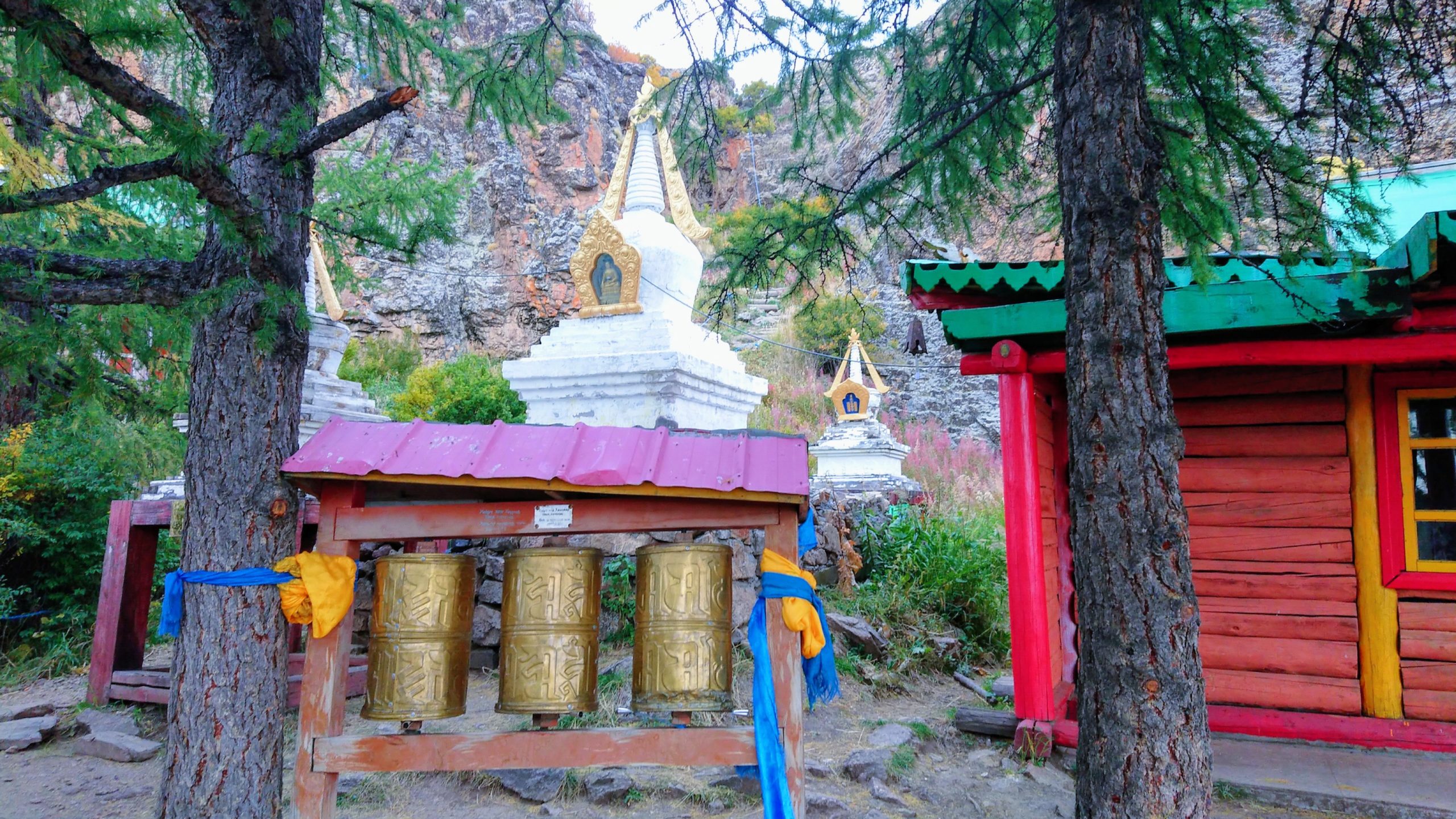 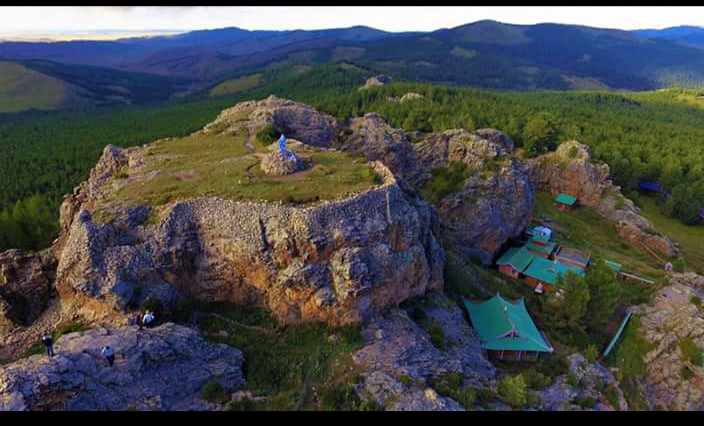 Near the top of the staircase, to the right of temples, are two wells about fifteen feet from each other. One has fresh water in it, while the other has slightly brackish water. No one has been able to explain why one is brackish and the other not, or for that matter, how the wells come to exist at all! In their location, very close to the summit of the mountain, ordinarily, there would not be any underground water sources.

Following the temple’s trail, to the left, when facing the mountain, one is brought to two meditation caves. Near the cave is “Zanabazar’s throne”, a stone seat where, according to monks in residence, Zanabazar would seat each morning at dawn. On the sloping edge of the trail, below the caves, one can see pressed into native rock the imprints of several feet. Local monks say that one of these imprints belongs to Zanabazar as a small boy, while the other is of his foot as a grown man. There is also an imprint of what is said to be his horse’s hoof. To the right of temple a path leads upward to the summit of the rock. One branch of the path leads to the so called mother’s womb, a narrow passageway which pilgrims crawl through to be symbolically reborn and cleansed of their sins. The other extension of the path continues to the peak, where the large ovoo is located.

Tuvkhun Monastery was destroyed twice in history and taken under the protection of the state in 1992. In 2001, four temples, two stupas, and the front gate were restored to its first appearance. Now the monastery includes the Spiritual Practice Temple, Ochirdari, Gombogur Gods Temple, Creation Temple, Forever Flaming Butter Lamp Temple, two stupas, and Tibetan Prayer Wheels.

The hope of Akhamani is to assist Lama Shagdarsuren Baynjargal in his devoted effort to restore and maintain the temple. We thank everyone who has helped us assist him directly.

You can be of direct assistance to ancestral communities and vulnerable populations around the world by making a donation. All donations are considered charitable tax deductions in all of the European countries, Switzerland, the USA, and other parts of the World.

Assisting Akhamani means helping to support populations, cultures, knowledge, and places that tend to disappear while creating a real link that transcends borders.

Please enter the amount of your donation below and leave us a note to inform us what project your donation is for. We thank you for your contribution and support!

To learn more about what we do visit our Events and Projects pages.